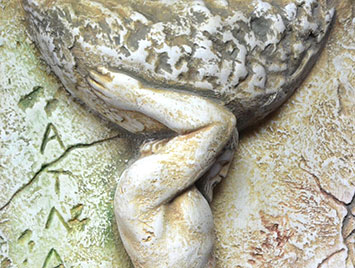 The atlas – the regulator of the spine

The atlas, the top vertebra of the cervical spine, plays a particular role in our health. As its name already suggests, in Greek mythology Atlas is a giant of a god in human form, who is forced by Zeus to carry the weight of the firmament eternally on his shoulders as a punishment.

The atlas vertebra also has to carry a great weight – the head, which weighs six to nine kilograms. Together with the back of the head, the atlas forms the uppermost joint of the head and encloses the brain stem.

When the atlas is positioned correctly under the skull, the hole through which the spinal cord passes is central and of optimal size.

The axis, the second cervical vertebra, forms the lowest joint of the head together with the atlas. This is where head rotation occurs. Both of these joints have cartilaginous layers instead of intervertebral discs.

The atlas, together with the back of the head and the second cervical vertebra, the axis, forms a special functional unit in our locomotor system. The optimal position of the atlas enables us to turn our head freely to the right and left and ensures the natural symmetry of the spine – this is how the body maintains a harmonious equilibrium.

The symmetrical and harmonious structure of the spine can also be seen in the fact that the shape of the atlas vertebra is similar to that of the pelvis.

The significance of the correct positioning of the atlas and thereby the symmetry of the spine is made clear from the enormous gravitational force, which impacts on the spine: in the evening we are up to two centimetres shorter than in the morning when we get up. The reason: the high pressure on the intervertebral discs presses fluid out of the intervertebral spaces, making them smaller as the day goes on.

Off balance – how a misaligned atlas affects our health

My many years of experience in eliciting palpatory findings have yielded further new knowledge: In addition to the tilting to the left the atlas may be rotated either to the right or to the left. Furthermore, the vertebra could be displaced either forwards (ventrally) or backwards (dorsally). The misalignment of the atlas (tilting, rotation and displacement) can eventually lead to a rotational instability of the cervical spine. Depending on the severity of the misalignment, cranial nerves and other nerve pathways could be subjected to constant pressure.

This ongoing pressure can lead to an abnormal posture and cause a multitude of symptoms. Some of the possible physical symptoms include dizziness, muscular tension, concentration problems, migraines, jaw pain, neck and back pain and prolapsed intervertebral discs.*

* Atlas correction is scientifically disputed and is not recognised by conventional medicine. The effects described are based solely on practical experience. According to the recognised rules and principles of scientific research, there is no scientific proof of the effects. The process of atlas correction is always dependent on individual patient factors. A concrete effect can therefore not be guaranteed.